Our reseller in your area stores our products and is more than happy to help you with all castor related matters. Use the form below to request for all the brochures you need, ask for a quota or to contact you.

Manner has many stories to tell 2/9

And in this series we’ll relate the most interesting, and perhaps also most surprising, ones.

Now that the company has been set up, Juho Manner has quickly realized that there is plenty of demand for his products. Mannerin Konepaja was founded in Hanko in 1890.

Growing traffic and the busy port attracted a wide range of industries to the town. The population had grown tenfold within about 15 years, and the village of a few hundred residents had turned into a moderately sized town. Juho Manner’s business also grew rapidly.

He first had his workshop at his house, then moved to a separate workspace on Koulukatu and hired his first employee, his younger brother Kaarlo, but the Koulukatu premises soon became too cramped. In 1892, Juho Manner bought coppersmith Alenius’ workshop on Ratakatu. The deal covered a whole range of machines and equipment, such as a rounding machine and an eccentric press, which came in handy as the tools he’d brought with him from his home parish were not sufficient to fulfil the orders and requirements of his demanding customers.

In April of the same year, the Hanko registrar office granted Manner permission to run a tinsmith and plate maker business with the associated rights and sales activities, so that what had started as a craftsmen’s trade started to look like a small-scale industry. 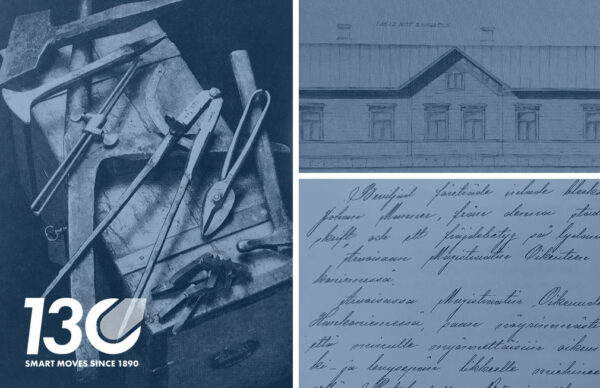